PAWA Supporter Helen Spillett gives us an update on Inspire Labs, a PAWA supported project with Without Borders that empowers young Sri Lankan women to develop and lead community impact projects of their own.

Without Borders is a social enterprise which was set up in 2014 by a group of young Sri Lankans. Their aim was to provide disadvantaged girls in rural areas with opportunities for personal development using models which are based on education and are sustainable because they drive change in the communities that the girls come from.

Without Borders encourages girls and young women to overcome obstacles which have been created by cultural values, family obligations, domestic abuse and other traumas to realise their potential and enable them to become community leaders in future. Co-founder Kavindya Thennakoon was recognised as a Queen’s Young Leader in 2015 for her service at Without Borders.

In 2017 PAWA has been providing support for up to 50 girls from varied racial and cultural backgrounds to participate in a Without Borders project called Inspire Labs.  This project is based on a year-long curriculum of 18 modules presented to the girls in the format of weekly interactive workshops.  The tools and methodologies come from the Leading Change resource developed by the University of Cambridge and the Queen’s Young Leaders program. 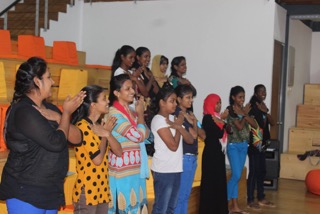 The workshops focus on four areas: gender based violence and sex education; digital literacy and safety on social media; leadership skills including confidence building, fundraising and project development; mentoring and networking.  The girls have also had two visits to workplaces (a media station and a YouTube creator space).

After the workshops the girls are placed in local teams to develop a community impact project of their own.  Selected graduate trainees of the project will also be invited to act as mentors and trainees for future participants.

The workshops take place in Colombo. Most of the girls PAWA is supporting come from areas such as Moratuwa, Wellampitiya and Maradhana in the outskirts of Colombo; some come from as far as Anuradhapura. They are mostly from low income settlements and fishing villages. Many have suffered domestic abuse, teenage pregnancy and other hardships. 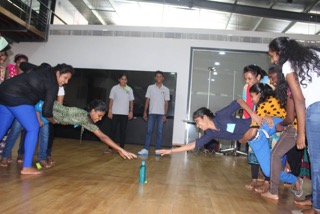 Kavindya reports that the girls have formed a strong support system and that they are expressing their ideas and critical feedback with increasing confidence.  The photos below show some workshops in progress and two of the girls who are benefiting from the project.

Sarah is 17 years old.  She goes to Muslim Ladies College and lives with her mother, father and sister. She is interested in a career in fashion design and in volunteering for UNICEF. She has passed her Ordinary Level exams with flying colours, getting an ‘A’ in both Arabic Literature and English.  These are her comments on the Inspire Labs project:

‘The knowledge and experience I gained through the workshops is immeasurable. They trained us on how to plan our future goals, how to bring out my ideas, to speak without stage fear and many more topics that I had never come across before.  We also learnt movie making, self defense, problem solving, how to be safe on social media and how to understand our own emotions. … Inspire Lab has truly empowered me to become a confident and fearless young person.  I wish every girl has a chance to go through a program like this.’ 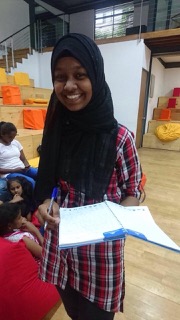 Chathu is from Anaradhapura.  Here is what she has to say about her experience of the Inspire Labs project:

‘My name is Chathurangani.  My village is in Anuradhapura.  My mother is terminally ill and is unable to walk and my father is also quite old.  I also have two sisters. I actually studied while at an orphanage and did both my Ordinary and Advanced Level exams with the help of a sponsor. … I have to say that I love the project and team who runs it. I come here every Saturday with a lot of dedication and commitment. …

‘When I came to the Inspire Lab initially, I had lost all hope and was disappointed with my life and myself with all my family problems.  But after I came to the Inspire Lab I was able to look at my problems with a different angle.  Inspire Lab goes beyond what we learn at school and teaches us about life and motivates us to discover our vision and passions. We learn different concepts and skills every week and I was able to discover many hidden talents and interests that I didn’t even know of. Also through the lab I’ve had the opportunity to meet many inspirational mentors and facilitators.  I feel like over the past year we have become a very close knit family.’ 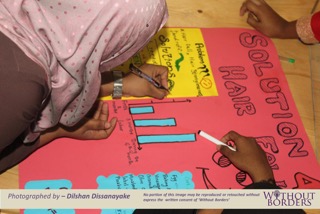 You can support this project and others like it by becoming part of the PAWA community. Here are some practical actions you can take:

Helen Spillett is PAWA supporter and member of PAWA Charity Team, monitoring the Inspire Labs project.  Her professional background is in Chinese Studies and in education.  She has worked in a voluntary capacity to support educational projects in Asia for the past ten years.

Photos: Thanks to Helen Spillett